Hope y'all had Happy Holidays. Cowboy and I had a fabulous few days in Charlotte celebrating Christmas with our dear son, his sweet wife and our precious grandson!

Are you looking forward to 2016?  It promises to be a great year!

I've just received my 2016 "Passion Planner". I stumbled onto their website when I was researching calendars. Y'all, I AM IN LOVE WITH THIS PLANNER! The Passion Planner is a combo calendar, planner, journal, memory keeper and has goal accountability. It helps keep you inspired with success quotes and on tract with weekly and monthly evaluations. They also pay it forward to people that can't afford their calendar and give back to charity. Win/Win.  Gotta support good-deed-doers.

Here are some (out of about 50--shoot for the moon, ya know) of my intentions for 2016:
Raise a glass to 2016 bringing us health, happiness, good fortune, abundance and prosperity.

Posted by StagerLinda at 5:20 PM 6 comments:

Twas the Fight Before Christmas and all through the house....

So what would the holidays be without family drama? (And, there was no alcohol involved!) I had a big cup of CRAZY served on a platter this weekend. After lunch on Saturday, I asked my SIL questions about her mom's health, a recent operation and doctor visits. Four hours after our conversation a raging lunatic emerged. It seems her hours of ruminating resulted in crisscrossed-wires. SIL misconstrued my concern as laying blame for her mother's failing condition.

Follow, if you will, the sequence of events in BIZARRE-O land:
I was making blueberry muffins for Sunday's breakfast and asked SIL if she had Tupperware or Ziploc to store them in. The coo-coo switch flipped during her container search. Suddenly, a bowl was hurled to the floor, F-bombs launched, a violent rage ensued with shrieking screams and spewing venom.(Think RHONJ Theresa Giudice's table toss.) Then she launched towards me with such force that Cowboy had to jump in front of her before she nailed me. (I've never been in a bitch fight but methinks that where she was headed!) In fact, I've never been on the receiving end of such smack-talk in my life. #takeaclassclass

Sister storms outside. Cowboy follows. She reloads and aims at her brother. Direct hit. Cowboy (and the neighbors) then get an earful of Sissie's sequestered frustration, condemnation, resentment and anger. See Dr. Phil schedule airing 2016.

I've. had. ENOUGH.
Exit stage left. Time to relo to a hotel.

I sling my cram-packed-in-a-jam Vera Bradley over my shoulder and bid the family adieu.

As I am departing these are the last words spoken to me,
"Why are you leaving?"

And as I drove out of sight I wished, Merry Christmas to all and to all a good night.

Posted by StagerLinda at 9:54 PM 4 comments:

Lamenting, Venting and Staging Your Home at Christmas


I was lunching with a client the other day.  She remarked that she had recently dined at a well known area restaurant. "There was a large table of  'church people' celebrating something. They held hands and prayed--out loud. Nobody wants to listen to that!"  The server brought our meals and the subject was changed.

Here's what I regret not saying. Christians are not particularly concerned with being politically correct. Christians share an inner-knowing about the comfort, support and joy our faith provides.  Most Christians don't intentionally try to publicly piss people off.  But when you get a group of like-minded Christians together sharing celebration, there will be words of gratitude and a simple blessing of our food.  Christians pray in public and often out loud.


I wish I was better at articulating my thoughts. Yesterday's San Bernadino tragedy has me incensed, outraged, horrified and terribly sad. I can't wrap my head around work colleagues, innocently  enjoying a Christmas celebration, then being senselessly gunned down. The brutal acts of the twisted Jihad terrorists inspire me speak out, pray harder and pray at full volume. 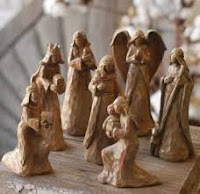 In days of yore, I advised sellers to limit Christmas decorations. I was parroting staging protocol."Christmas decor could be offensive to non-Christians". Later, I followed my heart and changed my advice. Yes, Christians deck the halls, trim your tree and set up the Nativity!